The 4th game of Oui Title Match between Oui title holder Habu and challenger 8-Dan Kimura started today. You can check on this website.


Both players have eight hours of thinking time. It takes two days to the end, and the first day was over at 6 pm. 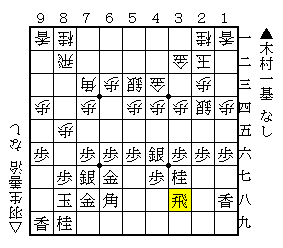 Both castles are called Yagura. Kimura (sente) chose Yagura, Silver-46 Strategy, which is popular among professional players. This strategy is aimed to attack from 3rd file. The knight would jump into 25, and open fire with ▲P35, after that, in reply to △Px,  sente attacks like ▲P15 △Px ▲Sx35 △Sx ▲Bx. Before ▲P35, throwing in ▲P55 △Px to stop the bishop's diagonal is also possible.
The meaning of the lance on 18 is to avoid the bishop's diagonal beforehand. If lance is on 19, there would be △P45 when the knight jumped into 25. The silver has to retreat to 37. Actually, △P45 is also considered when the lance is on 18. It would proceed with ▲Sx △B19+ ▲B46 △+Bx ▲Px. 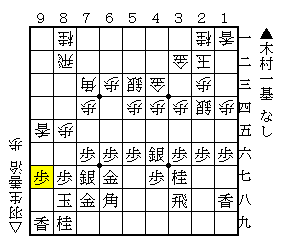 Habu started the edge attack to gain a pawn in hand because Kimura pushed ▲P96. The pawn would be used to break sente's attacking formation, such as △P45. If taken with the silver,  gote could capture the silver with △P*44. Instead of ▲P96, he could use the one move for attacking. But, it's an option. He is famous for good defense among shogi fans.
Against △Lx95, ▲Lx △Bx used to be played, however, have been almost never seen in recent official matches because of the weakness of 9th file. 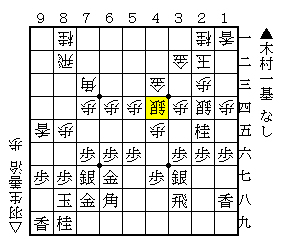 △P64 was a new move of Habu. It was a bold move because the bishop's diagonal stopped.
In reply to △P45, sente couldn't take it as I mentioned earlier. The silver must retreat.
△S44 which advanced the silver was today's last move. I suppose sente will attack with ▲P46 △Px ▲R48 to prevent the attacking formation from being oppressed. It's still an equal game.