Breaking the opponent's castle effectively would lead to winning. In the endgame, the speed towards the king is more important than gaining material.
I'd like to introduce some tactics for breaking Mino Castle. 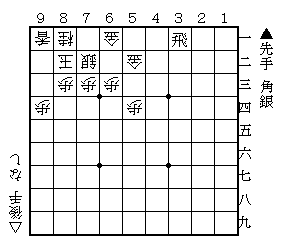 Here, ▲B*44 is threatening to play ▲S*71 on the next move.
As soon as a bishop or silver is placed on 71, the king will be in danger.
When the point 53 has been opened up, the move securing the bishop's diagonal is effective. 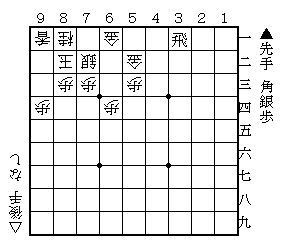 In case the point 53 has not been opened, ▲B*34 is a good attack here. Attacking the gold on 52 is one of the ways for breaking Mino. When cutting the bishop with ▲Bx52+, the gold on 61 is pulled out automatically, and then ▲S*71 becomes possible.
If the gold run to 62 against ▲B*34, dangling a pawn with ▲P*52 would be a subsequent attack. gote cannot take it. After cutting the bishop, there is ▲S*71 as well. But, leaving it as it is, ▲P51+ will be a severe move. 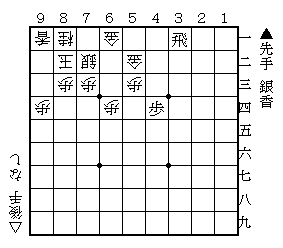 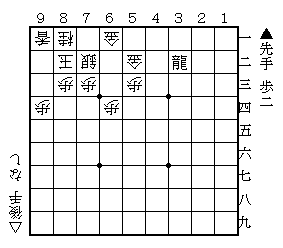 When attacking pieces are not enough, aiming to make a promoted pawn (Tokin in Japanese) is the theory. ▲P*43 or ▲P*44 is a good move here. If gote has a pawn, the defense with
△P*42 would be available against ▲P*44. 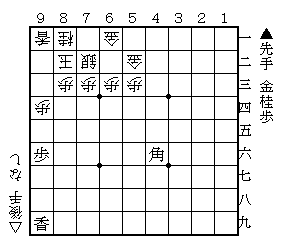 The king in Mino Castle is often aimed by bishop's line. Here, ▲N*74 hits the vital point.
In case of △K71, there is a checkmate with ▲G*82. And in case of △K92, the edge attack begins with ▲P95. To avoid this threat, gote defends with △P64, ▲Bx, △G63 in advance. This line is the typical defense for gote when attacked by the bishop diagonally. 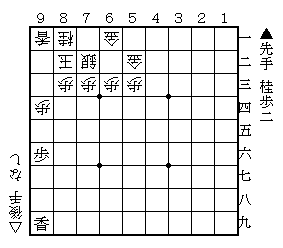 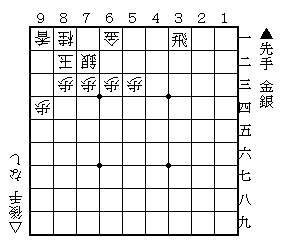 In case of Mino Castle without G52, sente tries to drop a bishop or silver in hand on 71 as the previous diagram. By ▲G*62, △Gx, ▲S*71, the aim is accomplished. 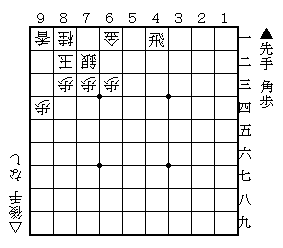 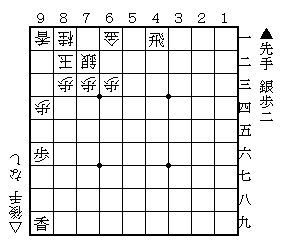 After it proceeds with ▲P*62, △G71, it looks like it's difficult to attack.
However, ▲P95 is a good subsequent attack. Continuing with △Px, ▲P*92, △Lx, ▲S*91, △Kx, ▲R71+, sente succeeds in breaking the castle. Making room for dropping the silver is the essence of this tactic.

The 5th game of the Oui title match

The 5th game of the Oui title match started today.
You can watch the game on this website.


Sente (Black) is Oui Habu, and gote (white) is 8-dan Kimura.
The Bishop Exchange strategy has been played. 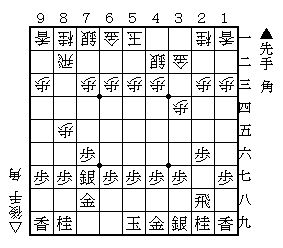 And, after that, this strategy is divided into three parts by the position of the right silver, Climbing Silver, Reclining Silver, and Rapid Advancing Silver.

The final position of the first day is still following a precedent.
Attention must be paid to their play from here.

Back to Diag.1, sente's formation is called Boat Castle (Funagakoi in Japanese). It's very simple. Kakoi or Gakoi means castle in Japanese.

Sente is aiming to bring out the left silver and open fire rapidly from the point 3e.
This strategy is called Left Silver-5g Rapid Attack, which is very different from Anaguma in that Anaguma tends to be a slow battle. Edge pawn on 9th file is mostly pushed by each opponent in this strategy because gote wants to make room for the king to escape when attacked from the side in the endgame, and sente wants to have the possibility of edge attack and sometimes move his bishop to 9g for attack.

To be more specific, I'd like to explain about the rapid attack strategy called Yamada Joseki from here, and will write about Anaguma later.

Yamada Joseki is one of the basic joseki against 4th-file rook invented by 9-dan Yamada (1933-1970). When gote pushes P-6d in Diag.4, sente begins to attack with P-3e. This move is the characteristic of Yamada Joseki.

Sente is aiming to break the 2nd file with the rook and the silver, and it's difficult for gote to defend the 2nd file completely. For instance, in reply to S-4f, if it proceeds with S-4c, Sx3e, R-2b for protecting the 2nd file, sente would be better with P*3d, B-5a, Sx4d (Diag.6).
In 4th-file rook games, basically, gote should not allow the silver to advance on 3e remaining his rook and bishop in his camp, because the major pieces would be oppressed by sente. Thus, gote needs to prepare for a counter attack in return. Here, (1) P-3f is the mainstream of this joseki, and (2) P-4e is also considered as an option.

P-3f is a common move to deal with the left silver rapid attack. And after the bishop exchange, it seems possible for sente to break the 2nd file with P-2d immediately. However, now is not the time to push the pawn, because gote has a counter attack.


In this situation, gote would be slightly better. B*3c, Rx2a+, R-2b was the line that gote prepared in advance. Instead of R-2b, promoting the bishop with Bx9i+ is defended by S*8h, and the horse will not work well.
At Diag.8, you may think sente is rather better because it gained a knight.  But, sente has to stop the bishop's diagonal by using hand pieces, and gote will take the knight back with R-2h immediately. In addition, gote's castle is stronger than sente's. For these reasons, gote has a little advantage here.
In 4th-file ranging rook vs. Rapid attack games, Mino Castle would be stronger than Boat Castle in many cases when both players go for mutual attack. Therefore, the side executing the rapid attack should aim to oppress the opponent's attacking position first.

Back to Diag.7, P-2d was not good.
According to Yamada Joseki, B-7g or B-8h is better. The meaning of this move is to secure the bishop's diagonal beforehand.