About a Yagura castle

In Shogi, castling is indispensable to king's safety. It's often said the king should be defended by two golds and one silver. Famous castles are Yagura, Mino castle, Anaguma and so on. A player needs to select a castle suitable for the opponent's strategy.

For example, against swinging rook, building Yagura is not good in general. When putting the king into the castle, the square diagonally front of the king becomes a vulnerable point.
In Diag.1, it's gote's turn. Starting to attack with △N-85 ▲S-86 △P-65, it would be better for gote already. The bishop's path is severe for sente. Thus, in case of castling Yagura, attention should be paid whether the opponent's bishop keeps an eye on one's own king indirectly.

This rule is also applied in Yagura vs Rapid Yagura games.


At Diag.3, sente's form is called rapid castling, which is one way of building a Yagura castle. When castling with ▲K-88, ▲G-78 after, sente can build Yagura in fewer moves than usual by omitting ▲B-68. But, in this case, attacked with △P-65 ▲Px △Nx, sente would have a little trouble because the king on the 2nd rank is near the opponent's attack, compared with on the 1st rank. Generally, against rapid strategy, sente shouldn't choice the rapid castling. Looking at △S-33 or △P-44 to go for Yagura, sente should do so.

In this way, depending on the opponent's play, a player need to change one's strategy and castle, not just in Yagura games. I think in the opening it's important to keep the balance.

The final game of the Ouza Title Match

The 5th-game of The Ouza Title Match between Habu and Toyoshima has been in progress today. So far the score is in a tie, 2 to 2. The winner of this game is able to win the Ouza Title.

Side Pawn Picker, Bishop-33 Strategy has been played, which is one of the most popular strategies among pro players, especially among young pro players. This is because it wins over 50% these days in spite of first-mover advantage. Generally, in Shogi, as in Chess, first-mover advantage exists certainly. Sente has been winning about 52% in all pro games, and this tendency is particularly strong in top title games. Thus, gote relatively tends to choose the strategy which has a higher winning rate.

Bumping the rook with △R-24 after advancing the silver to 23 is the tactical move discovered recently. In this position, sente cannot take the rook because there is no place to drop it in gote's camp after the exchange. On the other hand, gote can drop it on 27 and 28 to make a promoted rook. However, depending on the situation, it's possible to take the rook on 24 e.g. In case of ▲K-58, ▲S-48, ▲G-38, there is also no square to drop it in sente's camp. In fact, Habu has played this line in his games.

△K-62 is also the move which is often seen recently and has never played before, as well as △R-24. The aim is to go away from the opponent's rook and to build a Mino castle. If opened fire from 2nd or 3rd file in the future, gote would be able to play more offensive than the king being on 52. These two moves are in fashion in Side Pawn Picker.

The current position is at Diag.3. It's still in the middle game. Perhaps piece-building will continue for a while. I suppose sente will form the castle better, such as Yagura or Silver Crown, and attempt to oppress the rook on 74 little by little.

Ryuou Title Match between Ryuou Title Holder Moriuchi and Challenger 7-Dan Itodani has been in progress since yesterday in Hawaii. Ryuou is one of the two most important major titles. Another one is Meijin. The title match is played as a 7-game match, each game being played for two days. Sometimes it is held overseas with a view to spread of Shogi culture.

Here was a critical moment in the endgame. 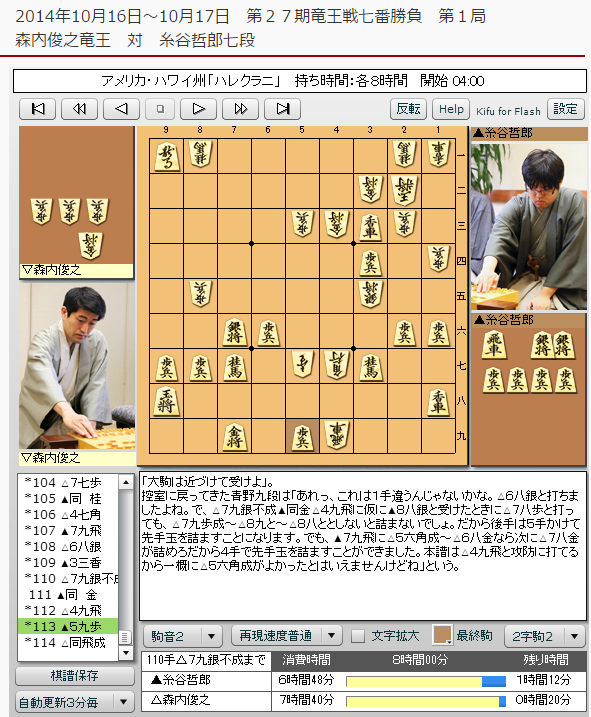 Sacrificing pawn with ▲P*59 was the technique to prevent the rook on 49 from defending his own camp when △B-56+ afterwards. Continuing with △Rx+ ▲Lx32+ △Kx ▲S*88 △B-56+ (Diag.1), in this position, the promoted rook couldn't control 4th file to protect his king. This was a big difference.

While I was writing this article, the game ended. The challenger won the 1st game. I'm really looking forward to the rest of the match.

The 4th-game of the Ouza Title Match has been played today.


I was surprised that the Challenger Toyoshima had played Central Rook Strategy, despite a static rook player. And Habu selected a countermeasure, a Silver-63 rapid attack.

Although △S-74 is usually said to be a bad shape as the silver advances far from the opponent's king and the knight on 81 becomes difficult to jump, △S-65 or △S-85 is the aim in this strategy. From here, oppressing the pieces with the two silvers will be important for gote.

▲R-56 was a bold move because the gold on 78 would be a floating piece. At a glance, △S-83 may look severe for sente, however, Totoshima naturally had calculated that during about one hour thinking. From ▲P*73, a slashing sequence, including the major pieces exchange continued.

After the sequence, watching this position, I couldn't say clearly which side got a won position in spite of the bishop-silver exchange. Here, as sente could make the promoted pawn with △P*74, it might be keeping the balance.

Now, the position is at Diag.4. I suppose Totoshima is slightly better.
The promoted pawn on 73 will be able to trade a gold. But, sente's two promoted bishops have a big influence on the board. A long endgame will still go on.


However, gote here has a counter attack with △N-45 (Diag.3)


I show the some variations which were actually played in pro games.

▲B*15 is not really a good move, although the pawn can promote and take the gold, because at Diag.6, gote can not take the promoted knight. If taken with the king, the king-bishop fork with △N*65 will occur. If the king run to 78, gote would be much better with such as △G*76, △N*75.

Although ▲B*56 is a tactical move aiming for taking the knight and at the same time, preventing the rook from turning into 26, the attack from △Rx56 is a good sequence as sente's camp has a weak point against a rook drop. At Diag.6, gote has an advantage. This is just one of the variations though.

When gote plays △N-33, the knowledge of the variations around here may be important. I think gote tends to be better against ▲P*87 relatively.